HO CHI MINH CITY, Vietnam — The Arashiyama Bamboo Forest, one of the most visited sites in Kyoto, Japan, was quiet enough to hear the bamboo creaking in the wind.

The Ngong Ping 360 cable cars in Hong Kong, which hover over Lantau Island and take passengers to a famous Buddha statue, hung motionless and empty.

The crush of flag-following tour groups that usually cram the Lantern Bridge in Hoi An’s ancient town in central Vietnam had disappeared.

And in Siem Reap, home to the ancient ruins of Angkor Wat in Cambodia, the usually busy Sala Lodges hadn’t had a new booking in three weeks.

The coronavirus epidemic is taking its toll on global tourism, which according to the World Travel & Tourism Council contributed $8.8 trillion to the world economy in 2018. Some economists say the epidemic could be the biggest drag on global economic growth since the financial crisis, with airlines alone expected to lose some $29 billion in revenues this year.

The Asian countries closest to China, which is the epicenter of the outbreak and the world’s leading source of international travelers and tourism spending, are feeling the brunt of the crisis, but the effects are spreading. On Sunday, Venice cut short its annual carnival celebration, and the Italian government shut down travel to 10 towns in the Lombardy region after a surge in new cases there.

In recent years, countries in Southeast Asia invested heavily in resorts and casinos to capture the swelling ranks of Chinese tourists. Now airlines, hotels and tour operators are suffering from a rush of cancellations and a drop in future bookings, primarily from mainland China, but also from Western travelers spooked by the spread of the virus in the region.

The economic toll is mounting: Countries that have relied heavily on Chinese tourism, including Vietnam, Thailand, Cambodia, Malaysia and Singapore, are each expected to lose at least $3 billion in tourism-related revenues, according to an analysis by Animesh Kumar, a travel and tourism director at GlobalData, a research and consulting firm based in London.

The steep losses are mostly because of the absence of Chinese tourists, but also because some “tourists from other countries are apprehensive about traveling anywhere close to China,” he wrote in his report.

A report last week from Hopper, the flight and hotel booking app, showed a decline in searches by Americans in the past several weeks for flights to Asian countries, especially China. Its analysis of billions of airfare quotes from across the internet showed a roughly 20 percent drop in demand to Malaysia, Singapore and Vietnam. The company said it was seeing a shift in Americans searching for domestic destinations over international locales.

Chinese travelers racked up an unprecedented 150 million trips abroad and spent more than $277 billion on international travel in 2018. But the juggernaut last year sputtered in the wake of slower economic growth and the trade war with the United States. It effectively came to a halt as the coronavirus epidemic led the government to bar groups of tourists from traveling abroad, and dozens of international carriers like American Airlines and United Airlines suspended flights to mainland China. 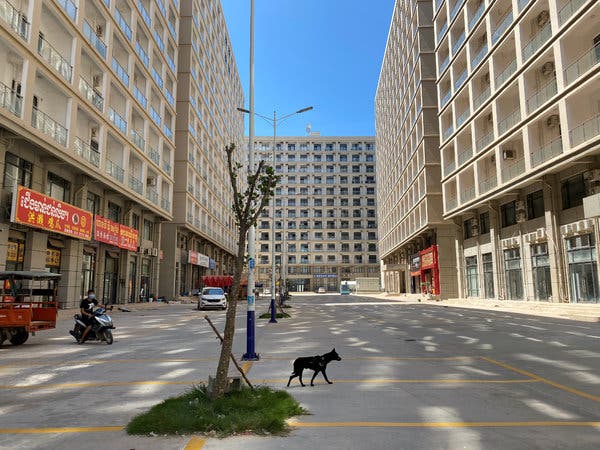 As the virus continues to spread, the Centers for Disease Control and Prevention on Saturday issued Level 2 alerts for Japan and South Korea, advising older adults and those with chronic conditions to “consider postponing nonessential travel.” On Wednesday, Hong Kong received a Level 1 watch advising travelers to take precautions like washing hands and avoiding sick people.

Jenni Honkanen and Tobias Solvefjord, both 39, of Skovde, Sweden, were on a half-full jet from Hong Kong to Ho Chi Minh City on Wednesday morning, wondering if sites would be closed or travel restricted. Still, the couple were not overly concerned.

They were aware that Vietnam had reported only a small number of cases (16 compared with more than 77,000 in China) and joked that it wouldn’t be bad being quarantined in the tropics instead of suffering through the bleak winter in Skovde.

Chinese travelers racked up an unprecedented 150 million trips abroad and spent more than $277 billion on international travel in 2018. But the juggernaut last year sputtered in the wake of slower economic growth and the trade war with the United States. It effectively came to a halt as the coronavirus epidemic led the government to bar groups of tourists from traveling abroad, and dozens of international carriers like American Airlines and United Airlines suspended flights to mainland China. 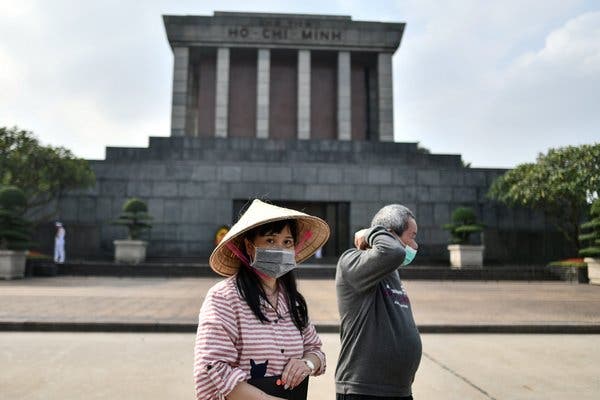 In one of the country’s most popular destinations, Hoi An, the scene last weekend was as if the former port city had returned to the days before package tours and fleets of tour buses clogged the streets, said resident Patricia Clegg, 64, a native of France whose parents are from Vietnam.

China and South Korea have been the biggest sources of tourists for the town in the past few years as sprawling resorts filled the coast between the town and Danang, about 20 miles north.

At Reaching Out handicraft shop in Hoi An’s ancient town, business is down 65 percent since the coronavirus hit the news and by 45 percent at its teahouse, said the owner, Le Nguyen Binh, 56. One-third of the staff is on leave and collecting unemployment until sales pick up. The 40 remaining staff members have their temperatures taken when they arrive to work and don masks, which are also offered to customers, along with hand sanitizer, Mr. Binh said.

In the midst of Japan’s historic tourism boom, February in Kyoto would normally see streets and parks filled with tourists — largely Chinese nationals visiting as part of tour groups — taking in the first plum blossoms in the former ancient capital. Chinese visitors supplied one-quarter of Japan’s record 32 million arrivals in 2018. Instead, the popular Chion and Nison temples were nearly void of sightseers. Katsunobu Kato, Japan’s health minister, has urged the public to “avoid nonurgent, nonessential gatherings.”

In Hong Kong, the Tourism Board chief, Dane Cheng, said tourism would take a bigger hit than it did during the outbreak of severe acute respiratory syndrome, or SARS, that struck the territory and mainland China 17 years ago. In the first two weeks of February, only 3,000 tourists a day visited Hong Kong, he said. In January, the city averaged about 65,000 tourists a day, a number that was already down because of months of political protests and a shrinking economy.

In Hong Kong, where 68 cases of the new disease, formally known as Covid-19, have been confirmed, government-run tourism sites like the harbor-front Hong Kong Museum of Art, the marine-life theme park Ocean Park and the Ngong Ping 360 cable cars have been closed. Events like Art Basel Hong Kong have also been canceled.

Tim Cheung, who was handing out fliers on Thursday evening for his restaurant in Lan Kwai Fong, Hong Kong’s popular night life district, said businesses there had already taken a hit during the protests and were worse off now, with business dropping 70 to 80 percent since the Chinese New Year.

“Basically we don’t know what will happen tomorrow,” he said. “I may be out of a job. I’ll work another day for as long as I can. Many Hong Kongers are like this now.”

Singapore, which has reported 89 coronavirus cases, announced a fiscal boost of several billion dollars to help households and sectors like aviation and tourism that are most affected by the outbreak. 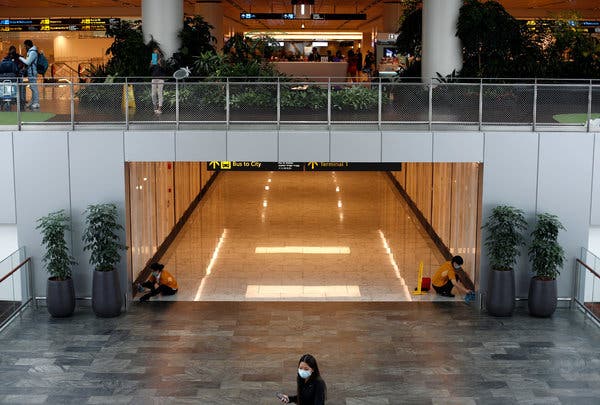 Jewel, a nature-themed complex at the Changi Airport, reflected the malaise. At the Rain Vortex indoor waterfall, usually crowded with people jostling to take selfies, there was plenty of space to take a photo alone. Apple Store employees in their dark blue T-shirts outnumbered shoppers two to one.

Jeanne Liu, the owner of Rich & Good Cake Shop, which has an outpost at Jewel, said that business was down by half. “The general mood in the country is depressed, and people aren’t going to places they perceive as crowded,” she said.

Robert and Jane Murray, 73 and 70, who live in Australia, were sitting in a mostly empty Terminal 3, waiting for their flight to Jaipur, India, to attend a wedding after spending three days in Singapore.

“We booked the trip before all the hype, and it made us want to cancel,” Mr. Murray said. “But we contacted our doctor, who said ‘It’s just like the flu,’ so we just take precautions, wash hands and we’re fine.”

In Cambodia’s usual tourist hot spot, Siem Reap, the airport was hauntingly empty and check-in and security lines were minimal.

Arne Lugeon, 56, the French-born owner and general manager of the Sala Lodges, said that as of mid-Feburary, its 11 traditional wooden houses had not had a new booking in three weeks, even though February is high season for tourism. “I can only hope this virus is contained and then ends soon,” he said.

Fabien Martial, 46, co-owner of the 35-room Viroth’s Hotel, said: “During the Chinese New Year, 70 percent of our clients are from China, but this year they all canceled. The hotel was nearly completely empty for a few days.”

“I’ve been a hotelier here through SARS, avian flu and political unrest,” Mr. Martial added. “I’ve learned to be patient and to endure. Business and tourism will be back.”

In Thailand, which receives, by far, the most Chinese tourists in Southeast Asia, with more than 10 million in 2018, the Platinum Mall in Bangkok is typically bustling this time of year, said Siriwan Saensuwan, 65, who has been selling clothes there for a decade. But for the past couple of weeks, she said, “it has been quiet, like a cemetery.”

“Look for yourself,” she said, “no one is walking around.”