More riders are using battery-powered bikes on group cycling tours, creating their own set of tensions and hand-wringing over the artificial advantage.

On a cycling tour along the coast of southwest Sardinia, Kathleen Robinson thanked God she was riding an electric bike up the winding heights. But she wished she’d had a class beforehand on the proper etiquette.

She didn’t realize that the hum of her motor would annoy some of the traditional cyclists on the tour, nor was she certain whether to spin in the back of the pack or move out front. Mrs. Robinson, 60, had enough sense to gloat tactically, like when she sailed past a friend grinding up a hill and “gave him my Queen Elizabeth wave.”

“There wasn’t a problem as long as I didn’t stay next to someone who was struggling hard,” she said. 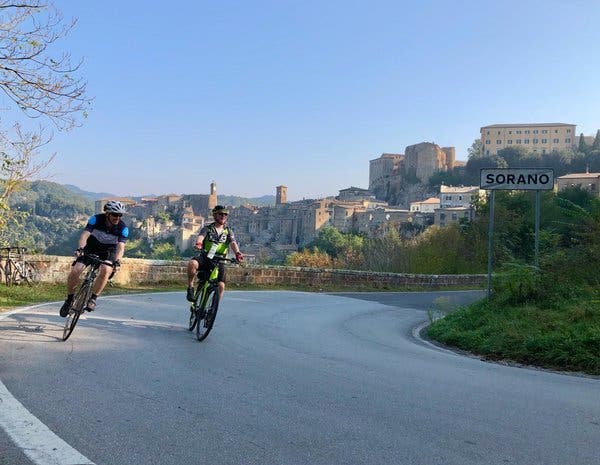 Over the last two years, bike tour companies large and small have seen a spike in demand for e-bikes, and have ramped up their battery-powered fleets and the equipment needed to haul the heavier machines. The bikes now are used by 10 to 30 percent of riders on tours, operators said, and that percentage is only increasing.

Pedaling kick starts an e-bike’s motors, which cut off at 20 miles per hour in the United States and about 15 mph in Europe. Riding an e-bike can feel like having wind at your back or a pair of bionic legs. That has opened tours to noncyclists who are less fit, people once sidelined by injury and older cyclists looking to extend their riding days. Like a marriage counselor, they unite couples who once vacationed separately or joined bike tours reluctantly.

But as with many innovations in sports — think high-tech racing suits for swimmers and sticky gloves for football players — e-bikes have created their own set of tensions and hand-wringing over the artificial advantage.

While most on the tours say e-bikes make for more harmonious rides with fewer stressed-out stragglers, the bikes have also given rise to incessant corny jokes — “I didn’t think that hill was that hard,” said the e-biker — and no shortage of muttered obscenities from drained riders as e-bikers nonchalantly breeze by.

ExperiencePlus!, which is based in Colorado, limited e-bikes to two per trip until 2017, when requests multiplied, Ms. Price said.

Guides now have an orientation script explaining that e-bikes are “not mini-mopeds,” and asking e-bikers “to respect your fellow push-bike riders as you pass them effortlessly on a climb, and for those of you on push bikes to not look ‘down’ on the e-bikers.”

Rarely does a guide need to reprimand a rider, said Alain Rimondi, a tour leader for ExperiencePlus! in Italy. But when the sides are evenly mixed, he said, “it turns into an interesting social experiment.”

At the start, e-bikers can feel a bit guilty switching on the motor, he said. In the first days they tend to fly past the others, especially on hills, and some even arrive early for lunch. Later, e-bikers usually hang back and the group is more compact.

At the end of rides, the e-bike riders are happy and refreshed from their workout, he said, and push-bike riders often ask if they can try an e-bike. 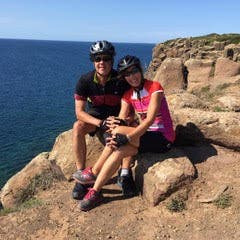 Battery-powered bikes were invented more than a century ago. But they remained a clunky oddity until this decade, taking hold on riding tours first in Europe, which has an expansive bike culture, then spreading to the United States.

Norman Patry, the owner of Summer Feet Cycling in Maine, said he was too far ahead of the curve when he bought a dozen e-bikes six years ago. They gathered dust and he stopped promoting them on his website.

Now, the sector is full of energy.

“Everybody who is in the biking space is talking about it and thinking about it,” Mr. Patry said. “We’re past the point where they’re wondering if they’re going to do it; everybody thinks they need to do it now.” He’s replacing his fleet this year.

The costs can be substantial: E-bikes typically run at least double the price of a regular hybrid touring bike, with outfitters generally paying $1,500 to $3,000 for one e-bike.

One of the larger tour operators, Vermont-based VBT Bicycling and Walking Vacations, has invested more than $1 million in e-bikes, said Ray Hourani, head of global operations.

In a five-year plan created in 2016, VBT projected 12 percent of bookings would be for e-bikes. It’s already at 30 percent, he said.

That’s brought new challenges. Hundreds of new e-bikes required dozens of custom-made trailers to support them. And guides in Europe needed a special driver’s license to transport the heavier loads.

The staff at Bicycle Adventures of Redmond, Wash., had seemingly endless debates when it tested e-bikes six years ago. According to Todd Starnes, the owner, they argued whether e-bikes were cheating, how e-bikers would be treated, if the tour makeup would be changed and more.

The verdict? “In some ways, I think it makes the trip a little better,” Mr. Starnes said.

For one, tours begin with less anxious questions about distance and elevation.

“The person on the e-bike is less concerned at that point about whether they can keep up and more concerned about what the others think about them being on an e-bike,” Mr. Starnes said. “And they soon learn that nobody cares.”

E-bikes also make it easier for guides; less sheep-dogging laggards who delay the rest of the group.

“Everybody is at lunch at the same time,” Mr. Starnes said.

An e-bike was the solution for Hope and Richard Wilson last fall. Mrs. Wilson had pinched a nerve in her leg, but her husband had his mind set on a foliage cycling tour in Maine with three other couples.

“It made it a lot more fun when you can keep up,” Mrs. Wilson, 57, said. “You’re going by beautiful estates and beautiful landscape and you get to share it with somebody instead of lagging at the back.”

Joe DeYoung, a former amateur racer who leads rides on parts of the Tour de France route, is in favor of e-bikes, but not for himself.

He remembers straining up the legendary Mont Ventoux in France last year, then hearing humming and seeing two e-bikes blow past him.

“About a mile from the top, where it really gets steep, they ran out of batteries and I went by them,” Mr. DeYoung, 67, said. “I got my revenge.”

But as more commuters and recreational cyclists embrace e-bikes, and as technological advances continue to make them cheaper and sleeker, the influx on bike tours is likely to continue.