Nearly 300 years ago, an enlightened maharajah with a penchant for jewels and an eye for architecture built a planned city amid the arid hills of northwest India. Called Jaipur after the city’s founder, Jai Singh II, it arose on a grid of urban sectors not just for royal palaces, but for the workshops of artisans recruited to establish a new commercial hub. These days, gem cutters, jewelry designers and garment-makers are still flourishing in one of India’s most popular tourist and shopping destinations, part of the Delhi-Agra-Jaipur Golden Triangle. This is a city where the royals, to this day, occupy a wing of the City Palace, and where mid-rise towers and a new subway system are muscling in on a proud past. Street markets are awash in color and handicrafts, and Hindu temples can be found nearly every 100 yards. Though the streets seethe with beeping and belching traffic, tourists and dung-dropping cows, you can find bliss amid the commotion.

Hinduism, with its colorful gods and goddesses, permeates everyday life, so dive in with a visit to Birla Temple, a domed, white-marble building with an airy main hall, stained-glass windows and a shrine to the uber god Vishnu, and Lakshmi, goddess of wealth. Speaking of Uber, the ride-hailing service is a good way get around this spread-out city. From Birla, it’s a 20-minute ride to Govind Dev Ji Temple, built in view of the emperor’s City Palace windows. Get there for the 5:30 p.m. ceremony when priests in saffron robes pull back the curtains to the altar holding Lord Krishna, playing the flute under golden umbrellas. People pour into an open-walled hall by the hundreds, raising their hands in adulation, clapping and chanting while making circuits around the shrine, banging knockers on its wooden side doors to let Krishna know they have arrived. Free entry.

You can dine like royalty at 1135 AD, a restaurant in a palace perched atop Amber Fort, a magnificent hybrid of Hindu and Mughal architecture. Walk through the main courtyard up to a terrace with candlelit tables and scattered rose petals. A thali, or meal, served on a silver platter lets you sample a variety of dishes, from goat in red sauce to black lentil dal and a spinach and corn purée (1,750 rupees, or about $24). Ask for a tour of the glittering private dining room upstairs, with silver-backed chairs under chandeliers and a ceiling embellished with mirror fragments. The fort is a popular location for filmmakers. If you’re lucky, it will be alive with turbaned extras, white horses and adorned camels re-enacting a scene from a historical drama in the floodlit courtyard.

Birla Temple is a domed, white-marble building with an airy main hall and a shrine to the uber god Vishnu, and Lakshmi, goddess of wealth.CreditPoras Chaudhary for The New York Times 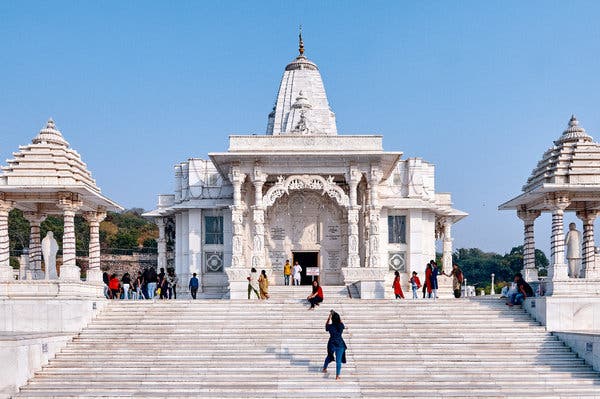 Ghee, a form of clarified butter, is essential to the fare at Laxmi Mishthan Bhandar, a landmark hotel, bakery and vegetarian restaurant where the menu front declares an adherence to Lord Krishna’s condemnation of food “which is half-cooked or halfripe …” The Rajasthani Special breakfast platters are anything but. Badvi Bhaji (potatoes, tomatoes, coriander and green hot chilies) and Poori Aloo Mattar (potatoes in tomato stew with peas), with fried wheat pockets, are served by efficient waiters in brown jackets with epaulets (breakfast for two, 750 rupees). The décor feels early 1980s — purple and teal wallpaper, and abstract Hindu wall hangings — but it’s been around since 1954, frequented by the jewelers and gem wholesalers taking a break from their workstations in the nearby back alleys.

Step back into the history of clan-warring Rajasthan, long before Jaipur became its capital, on a tour of the Albert Hall Museum. Or, step into the frenetic present, exploring the boulevards and back lanes of the old city. Walk under the porticos of sidewalk bazaars festooned with everything from puppets to pajama pants; around the horned bulls wandering on the narrow roads; past the carts of fried chickpea cakes, and marble-lined shrines with statues of gods; through an arched doorway into a four-story courtyard with intricate floral railings; and into a crowd of men at a corner fountain polishing brass prayer cups.

Hawa Mahal, also known as the Palace of Winds, features a five-story facade of protruding bays with lattice stonework and 365 windows.CreditPoras Chaudhary for The New York Times 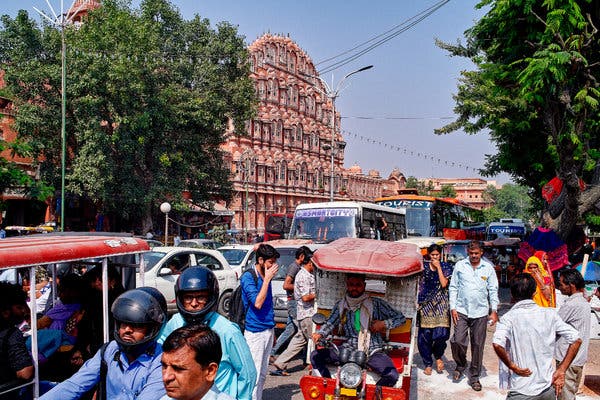 Jaipur is known as the Pink City, built with sandstone and blushed with paint in 1876 to welcome the Prince of Wales. It is epitomized by the Hawa Mahal, or Palace of Winds. The five-story facade of protruding bays with lattice stonework and 365 windows is said to have been built as a screen for the women of the royal court so they could watch unobserved the parades of soldiers and elephants below. It’s a steep climb to the top, where it’s only one room deep, but the view and being ensconced in cupolas mimicking Krishna’s crown are worth it (entrance: 50 rupees for foreigners).

The decibel levels from the horns on the cars, motorcycles, scooters and tuk tuks on a main drag called Mirza Ismail Road, is nonstop. Until you step into Niros, a garden of tranquillity with yellow tablecloths, plush booths and mirrored walls and ceilings made to look like arched windows. Opened in 1949, it advertises itself as the city’s first to serve Chinese food. There are indeed plenty of Chinese items on the menu, but go local, with the Tandoori mixed grill — the goat kafta with chili and cardamom is exceptional — a spinach-and-cottage cheese Palak Paneer and yellow Dal Tadka (lunch for two, about 2,500 rupees).

Jaipur is a global center for cutting and polishing precious and semiprecious gems. Stop in Jewels Emporium’s stately white building and take a tour of the workshops, where cutters shape facets, and men at workbenches adorn gold settings with jewels, and rinse the gold dust from their hands in wash basins (the water is later sold to extraction companies). Upstairs is the finished jewelry (recently spotted: a pair of emerald earrings in a gold setting, about 45,000 rupees). Around the corner, at Gem Palace, an owner, Sanjay Kasliwal, and his son Samir might show you a frayed registry with signatures from customers like Jacqueline Kennedy and Bo Derek, and a diamond and enamel turban ornament made by the family’s ancestors 300 years ago, valued at $7 million. There is also a small shop called Rajasthan Gems, 41-A Shahpura Bagh, Amer Road, where the owner Satish Sharma will make you a cornflower-blue sapphire ring, and enlighten you with his philosophy of yoga.

Samir Kasliwal shows a necklace to a customer at Gem Palace, a longtime jewelry store in Jaipur.CreditPoras Chaudhary for The New York Times 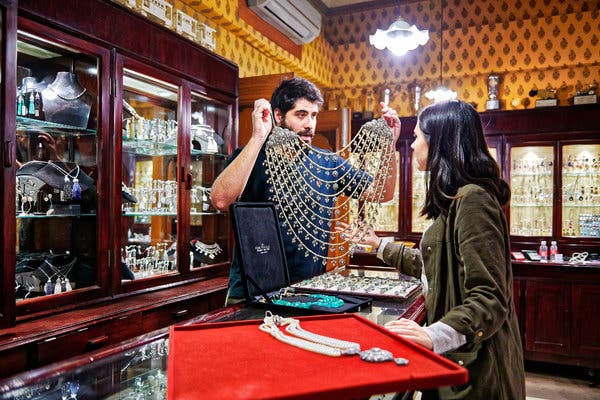 Inside Saurashtra Impex, an explosion of colorful fabrics heaped in piles and stacked to the ceilings greets you, along with the owner, Kishor Maheshwari, and his staff. They’ll extricate antique cushion covers from Pakistan, tablecloths with block-printed blue elephants and vintage rugs from Afghanistan. For a more refined retail experience, RASA boutique makes its own mod-Mughal brand of exquisite silk, cotton and linen dresses, tops, scarves and bedding (silk scarves start at 4,400 rupees).

The city isn’t exactly a hotbed of celebrity chefs, but the culinary scene is still lively. Options range from Meraaki Kitchen for dal fondue, or Virasat for traditional thali. For superb northern Indian cuisine, head to Peshawri, downstairs at the ITC Rajputana hotel. With its stone walls and mushroom-like stools, it serves dishes you eat with your hands, and pair with a pleasant Sauvignon Blanc from India’s Fratelli Wines (dinner for two, about 7,000 rupees).

At the famous Pandit Kulfi, redshirted servers prepare a frozen treat of milk, crushed almonds and cashews, sugar and cinnamon. They freeze it in metal cylinders and tap out the sweet and dense, double-sticked little rockets (20 to 50 rupees). For the international party scene, head to Bar Palladio, set in a former palace’s garden house with a dramatic Wedgwood blue interior and canopied tables in the garden. It serves Italian cuisine and cocktails, like a Cosmopolitan (500 rupees).

At Pandit Kulfi, a specialty is a frozen treat of milk, crushed almonds and cashews, sugar and cinnamon.CreditPoras Chaudhary for The New York Times 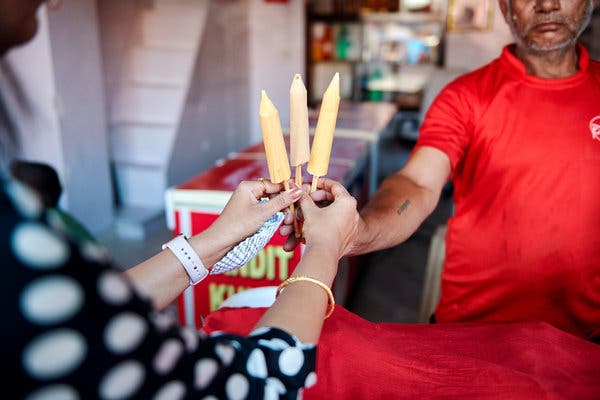 A 500-rupee ticket to the City Palace will get you into a museum with royal costumes and a courtyard displaying massive silver vessels that carried an emperor’s drinking water from the Ganges River to London in 1902 for Edward VII’s coronation. But splurge on the 2,500-rupee Royal Grandeur ticket to see where the monarchs lived. The sovereigns still entertain in an ornate dining room and parlor, where chairs have silver lions for armrests and walls are painted with gold dust and extracts of rubies and emeralds. Have brunch in the complex at Baradari, chic restaurant and bar in a stone courtyard with contemporary Rajasthani and continental dishes. Don’t miss the Smoked Baingan Bharta, a tower of spongy bread supporting roasted eggplant with chili powder, spinach greens and a fried egg (700 rupees), and the smoked tandoori pineapple (300 rupees).

Return to the Amber Fort to soak up the daytime atmospherics — the soft wind blowing through the open, pillared audience hall, and the crisp vista of mountainsides sloping down to a green lake. In the Sheesh Mahal, a fairy-tale, open-air hall of mirrors, the walls and ceilings are covered in geometric and floral patterns inlaid with thousands of tiny foil panels, as well as marble relief panels and larger mirrors. The effect is kaleidoscopic as the constellation of convex pieces above reflects the movement of the visitors below. (entrance, 200 rupees)

Rent a villa or apartment in the core of the city near the Albert Hall Museum on Airbnb. The options are limited but you can find apartments within walking distance to the gem market starting at $34, and a room with a private bath or an entire floor in heritage-style homes near Central Park for $50 to $80.

As if floating in Man Sagar Lake, the Jal Mahal island palace isn’t open for visitors, but you can take in the view from an upstairs room at the Trident across the road (about 16,000 rupees). The handsome, 21-year-old hotel has 152 rooms, jade-green marble floors and a puppeteer and drummer who put on an evening show beside the pool.

Get a taste of royal living with a stay in the Taj Jai Mahal Palace, with stately columned porticos and 18 acres of gardens. Built for an 18th-century Rajput military commander, it is one of several royal residences converted to hotels, this one operated by the renowned Taj group. You are greeted in the grand lobby with a garland of flowers, pink lychee drink and a forehead dot of sandalwood paste. A handsome room with a patio leading to gardens and a short walk to the 95-foot long pool costs about 25,000 rupees.