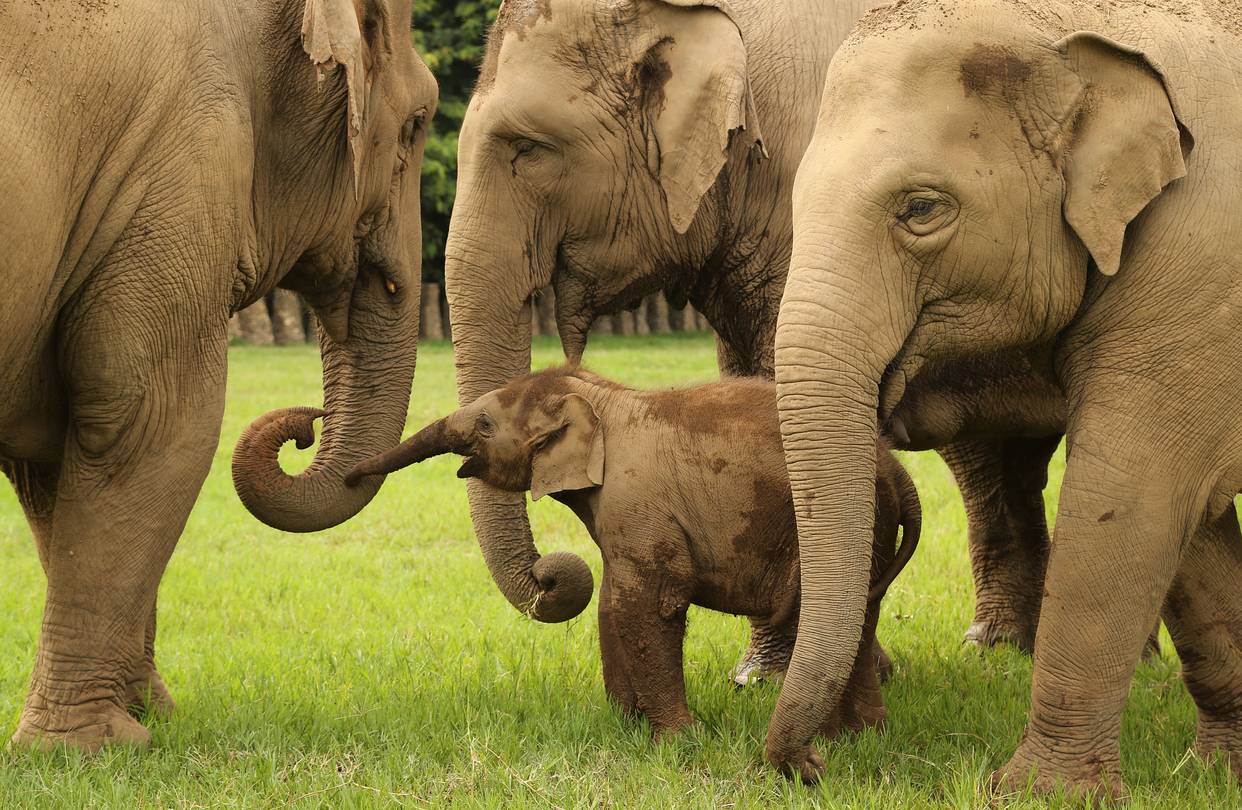 TRUNK BONDS Elephant Nature Park, Thailand’s first “no riding” camp, offers visitors the chance to observe many of its 83 elephants as they roam freely in the 160-acre sanctuary.
By Patrick Scott
The Wall Street Journal

THE ELEPHANT, my companion for the morning, lumbered out of the woods onto a dirt slope next to a stream in northern Thailand. He appeared calm, ears flapping and tail swinging. But he was 9 feet tall at the shoulders, with pointed tusks longer than my legs. I was dubious about standing too close to him, let alone climbing on top of him.

I was at Patara Elephant Farm in the forested mountains north of Chiang Mai to undertake a popular tourist activity that’s lately fallen under intense scrutiny: riding astride these mammoth creatures. With more than 90 elephant camps in the region, Chiang Mai serves as the world’s epicenter of elephant tourism.

It’s also where the clash over whether to ride elephants is playing out most acutely. Of the scores of brochures that litter the travel shops sandwiched between bars and Buddhist temples in Chiang Mai’s old city, roughly half tout “no riding” venues, with photos of tourists giving elephants mud baths and hugs.

Many of those camps opened in the last few years as animal-welfare groups intensified campaigns against riding, tourists boosted the blitz on social media, and major European tour companies like TUI boycotted rides and circus-like shows.

Activists who condemn riding excursions say they often indicate abusive treatment, like chaining elephants between outings and breaking in the younger animals with unnecessary force.

Feeling unjustly maligned, riding camps like Patara started a counter offensive. Beginning this year, they are developing and promoting new standards for camps, supported by veterinarians at Chiang Mai University, that cover everything from shelter height to water quality. According to these standards, riding elephants is harmless as long as the animals carry less than 10% of their body weight, or about 600 pounds for a 3-ton elephant.

The day at Patara began with owner Pat Trangprakan briefing our group of 20, mostly from the U.S. and Europe, about how the camp provides lifelong health care for elephants. He and his wife, Dao, opened the farm 14 years ago and now have 68 elephants on nearly a half square-mile of rolling hills.

After we were separated into smaller groups and paired with elephants at the stream, the handlers explained that signs of good health included sweat around the toenails and moist feces filled with fiber. We were encouraged to squeeze clumps of dung.

My elephant, a 24-year-old named BoonYen, was surprisingly easy to mount. But as he plodded up a steep jungle hill and I rocked side to side behind his twin-domed head, I kept wondering if this was the life he wanted. And if it wasn’t, whether this 4-ton beast would suddenly bolt and send me flying.

Ahead of me, Emma Banbury from London was thinking about the similarities between this experience and taking her horse out for ride. “I don’t have a problem with riding,” she told me later, “because with horses they need work, they need a job to do.” The other American in our group of six, Angela Peluso, said she had mixed emotions. “It just didn’t feel natural to me,” she said. “It felt too touristy.”

And that’s the rub. Tourism perpetuates captivity of elephants, but it also helps fund their care, especially since they were put out of work hauling teak after the government banned logging in 1989. Some animal-welfare advocates say the answer lies in creating sanctuaries where elephants roam free and have no direct interaction with visitors.

The day after my visit to Patara, I made my way to one of the few such venues moving in that direction, Elephant Nature Park, about 40 miles north of Chiang Mai. The country’s first “no riding camp,” it opened in 2002. I joined eight visitors from Europe as a guide led us around a valley in the mountains, stopping under towering thatch umbrellas to feed several elephants bananas and snap photos.

The park has 83 elephants, 25 of which the owner, Sangduen “Lek” Chailert, said she rescued last year from street performing and begging. Many of them roam the 160 acres freely during day. Unlike at the majority of camps, the elephants are not chained at night, but are kept in large pens.

Our guide fielded questions, rattling off answers—elephants gestate for nearly two years; herds consist of females and the young, while the bachelors are off on their own; these emotionally intelligent creatures have large brains that weigh about 11 pounds.

After a vegetarian buffet lunch in the park’s timber pavilion, our group trudged down to the riverbank. Tourists flanked the animals in the shallows, tossing up buckets of water for their daily baths. One in our group, Gerhard Schuster, a retired orthopedic surgeon from Germany, voiced the question I’d been pondering since I arrived in Chiang Mai: “Is it good for them to be touched, each by 150 people?” he wondered. “I’m not sure.”

Veterinarians at Chiang Mai University are conducting stress studies to help find out. Meanwhile, the Elephant Nature Park stopped the splash baths a few weeks following my visit after guest surveys indicated a willingness to visit even if bathing was not part of the program.

Next up, Ms. Chailert said, will be phasing out tourists feeding the elephants. Instead, visitors will observe from a distance on elevated platforms. “In their lives they get a lot of hands on them,” said Ms. Chailert. “We call this a hands-off project. We move step by step.”

THE LOWDOWN / Tracking Down Elephants in Northern Thailand

GETTING THERE Chiang Mai is easily accessible from Bangkok, with multiple airlines offering regular daily flights.

STAYING THERE Most trips to camps in the Chiang Mai area are day visits, though some offer overnight stays for volunteers, which can cost several hundred dollars a week. Among the high-end, overnight camps farther away: Four Seasons Tented Camp Golden Triangle in Chiang Rai, where guests can walk with elephants or ride them. A three-night package in a luxury tent including meals, a boat ride on the Mekong River and wine and cheese tastings, starts at about $2,800 a night for two. fourseasons.com/goldentriangle

Boon Lott’s Elephant Sanctuary in Sukhothai lets guests walk with elephants (no riding permitted). A four-night package in a teak cottage including meals (no alcohol) and activities like collecting elephant food, costs about $180 a night a person blesele.org

A day visit at Elephant Nature Park, about 40 miles north of Chiang Mai’s old city, costs about $75 a person, including lunch and transportation. elephantnaturepark.org Patara Elephant Farm charges about $175 a person for a day visit that includes two, 20- to 50-minute rides, lunch and transfers. pataraelephantfarm.com

One thought on “Should Tourists Ride Elephants in Thailand?”