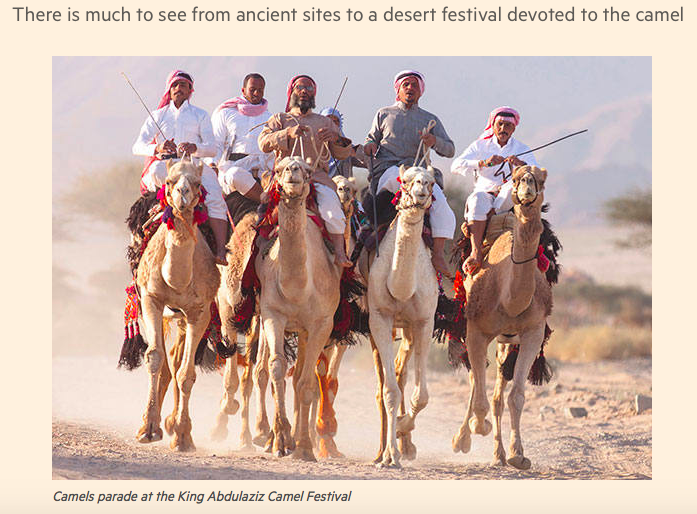 I am in a long, air-conditioned trailer in the middle of the Saudi Arabian desert, sitting on a gold-cushioned sofa next to a wealthy Bedouin furniture magnate. Two days ago, he tells me, he bought 10 white camels for SR60m, or about £12.3m, to enhance the herd that he will soon parade nearby at the kingdom’s annual camel beauty contest.

Yes, that’s right, a beauty pageant for camels, with the most fetching often going on to be sold for millions. Who knew that protruding lower lips and humps toward the rear of the back were part of a perfect package?

Spend a couple of days at the King Abdulaziz Camel Festival talking with Bedouins about Saudi culture, their love for the animal they call the “ship of the desert” and how winning top prizes endows their reputations and bank accounts, and it all starts to seem ordinary. Almost.

But the month-long event, which takes place every spring, also fits into a broader storyline of the Islamic monarchy’s plan to wean itself from its oil addiction and reform its economy, with an emphasis on building up its nascent tourism and cultural heritage offerings.

This year, the government took over the festival and built a new home for it at Al Sayaheed, 140km north-east of Riyadh, adding an entertainment village with restaurants, stages and craft stalls, as well as an electronic registration system for the 30,000 beasts that trek across the desert to attend.

Longer term, the plan is to turn it into a permanent attraction, with accommodation in desert eco lodges, and to add camel races and other events to keep it busy through the year.

“Tourism is a very big source for the economy and emphasising this part of our culture is a clever move,” the Bedouin furniture mogul Talaq Dhafi Al-Kahtani told me as he fielded calls on his mobile phone and an aproned worker outside skinned a hanging sheep. “Saudi heritage was not very well publicised to the world. Let’s hope this is the beginning.”

To outsiders, tourism and Saudi Arabia may seem as odd a pairing as camels and beauty. This is a country much criticised for its human rights record and brutal justice system; where women are not allowed to drive and where most of them appear in public shrouded from head to toe in black robes and veils; where alcohol, cinemas and gambling are banned; where businesses shut several times a day during prayer. Tourist visas do not even exist, though religious pilgrims and those coming for business or education can apply for visas.

But it has a lot to offer travellers, too: the incredible western desert dunes traversed by TE Lawrence; a massive Red Sea coastline of largely undisturbed coral reefs and islands; the rock-hewn tombs of the ancient Nabataean kingdom of Madain Saleh, known as the Petra of Saudi Arabia, and even southern mountain villages such as Abha, where locals boast that it’s foggy and chilly in the summer. And all of it spiced by the added thrill of seeing places so little-explored by outsiders.

“Madain Saleh doesn’t have anything as big as the Treasury at Petra but the joy of it is there’s no one else there,” says Justin Wateridge, managing director of Steppes Travel, who gained special permission to take a group there in March. “We stayed there until sunset, sitting on a sand dune — to have that silence and atmosphere was very special.”

He also enthuses about the landscape surrounding the site, and Al Ula to the south. “You could spend days exploring by 4×4, to me it seemed a combination of Wadi Rum, the Ennedi desert in northern Chad and Monument Valley.”

Steppes are planning another trip in November, taking in both Petra and Madain Saleh, while Wild Frontiers has an itinerary ready to launch as soon as officials give the go-ahead for tourist visas, something long rumoured and much anticipated. And the waiting may soon be over.

“We are sort of looking at after the summer,” said Prince Sultan bin Salman bin Abdulaziz Al-Saud, the head of the Saudi Commission for Tourism and National Heritage, in a telephone interview.

Details have to be worked out, but the visas may cost $40 and be issued at overseas embassies. Initially they would likely be limited to guided special-interest groups — “We are not at all interested in open-door tourism,” said Prince Sultan — but according to Dr Salah Altaleb, a vice-president of the commission, independent leisure travel might come as a second phase.

Prince Sultan has been preaching tourism’s benefits since his commission was created 17 years ago and has forged partnerships with other ministries, local officials, international investors and world tourism groups, instituting everything from tour-guide licensing to laws for preserving antiquities.

What’s different now is Vision 2030, the blueprint laid out last year to revolutionise the economy. The steep drop in oil prices that hit the kingdom nearly three years ago led to budget deficits and kick-started plans to develop non-oil sectors such as mining and tourism.

“It’s not just me talking any more; it’s the numbers that are talking and it’s the public talking,” Prince Sultan said. “Today, there is huge public demand.”

He recently received approval for a SR2.8bn fund for interest-free loans for tourism projects such as resorts, and he got the go-head from his father, King Salman, for a Koran Oasis museum complex in Medina that will tell the story of Islam.

As well as authorising tourist visas, officials are keen to promote domestic and religious tourism. This year under a new visa program, visitors for Umrah, the pilgrimage that can be performed through most of the year, are now allowed to travel beyond the limits of Jeddah, Mecca and Medina, and the government has set a lofty goal of nearly quadrupling those visitors to 30m by 2030.

The opening up of such a conservative country is unlikely to be straightforward, however. Last year, the kingdom created an entertainment authority to help promote once-taboo events such as comedy shows and the kingdom’s first Comic Con science fiction and fantasy jamboree in Jeddah in February.

But some conservative clerics and social-media chatter condemned the event, where costumed young men and women mingled freely and some reportedly even swayed to music, and the authority issued penalties against the organiser for an unspecified “violation”.

As esoteric as it might seem, the camel festival is a big hitter of Saudi’s domestic tourism scene. Its organisers say that 400,000 people turned out between mid-March and mid-April, a small fraction of whom were foreigners, mostly expats working in Saudi Arabia.

I was offered a visa as a journalist, to be issued on arrival. (In practice, this meant two-and-a-half hours chatting with immigration officers as they looked into who I was and how I had been invited. Though first impressions were not as bad as that might sound: the officers were keen on showing me their desert safari and camping videos and it was interesting to see them greet each other by bumping noses and snack on dates dipped in tahini and Arabic coffee, a mild, yellowish brew made with cardamom, saffron and cloves.)

On the days I was at the festival, the grandstands were filled with men dressed identically in the traditional Saudi garb of white robes and red-and-white headscarves as packs of camels paraded along the track.

At the entertainment village, crowds of families — nearly all of the women cloaked in black abayas, hijabs or niqabs — checked out poetry readings about camels, a replica of an age-old Bedouin encampment, and a camel museum that included mummified dromedaries and quotes about animals in the Koran.

Desert nomads for centuries depended on them for trade, milk, meat, fabric and dowries, as well as to help spread Islam from western Arabia to the rest of the region. Then came the unification of the tribes, the creation of the kingdom, and the discovery of oil early in the last century.

Now the 1,300 camel owners who brought their Toyota caravans to the festival from around the Gulf peninsula mainly raise them to propagate breeds of pure Arabian camels, and turn them into lucrative assets.

Camels were shown in packs of 30, 50 or 100, in six separate colours. They trotted past the grandstands, often with several gangly calves in tow, then suddenly reversed and crowded a few meters from a dozen robed Bedouin judges standing in a row on the track, taking note of the fairest features.

The festival’s camel beauty pageant Al-Kahtani, the Bedouin businessman, said that receiving a prize from King Salman for his animals would be honour enough.

“But economically . . . ” he explained through an interpreter, the offspring of winning camels could be sold at “a very high price”. And win he did — first place for his herd, second for his single, for a total of SR1.2m.

Not all the camels were high dollar. Later in the festival, I got a ride to the auction pens on the flat expanse several kilometres from the pop-up village, joined by another rare breed at the event, a fellow American. Rod Woodward, who lives in Riyadh and works on its ongoing subway project, was as curious as I was about what makes a camel so desirable.

As a pair of tan females darted and bucked around the auction pen, one of the owners in the crowd explained: first off, they should be tall. The bottom-lip flap is also key. And they must have large heads, long thin necks, big eyes with fluttering lashes, and small ears on white camels and pointy ears on black ones.

But this pair was lacking, and they were unable to have calves. The auctioneer’s rapid-fire repetition of the asking price blared from a platform beside the pen. But it was stuck at SR38,000, we were told, and in the end the owner refused to sell.

Before heading back we stopped at another pen to taste freshly pulled camel milk, which was warm, light, rather tasty and — like everything about the event — something neither of us had ever experienced before.

This is a text widget. The Text Widget allows you to add text or HTML to your sidebar. You can use a text widget to display text, links, images, HTML, or a combination of these. Edit them in the Widget section of the Customizer.
Loading Comments...
%d bloggers like this: